A quiet birding week. Not been out and not seen much. However I have noticed the sounds of migrating Redwing passing overhead in the night. Because I have done nothing bird related this week, I will focus on them!

Redwing (Turdus iliacus) is a species which I have ringed before in the past. Lovely bird in the hand and an option for favourite thrush (can't forget Fieldfares!). Very much a bird I associate with winter time back home, as I live in the fens, you can get some pretty decent flocks, often mixed in with Fieldfare. What I have learnt after a quick google is that Redwing have two subspecies, iliacus and coburni. Iliacus is found through and breeds in mainland Europe and winters here in the UK. Coburni however are Icelandic and Faroese (I have no idea if this the collect term for Faroe Islanders...) and winter along Western Scotland and Ireland as well as far south as Northern Spain. The visual differences are apparently a larger and darker bird would be for Coburni. 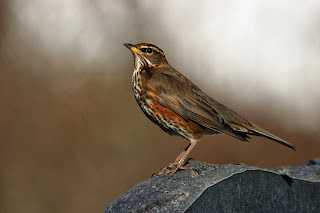 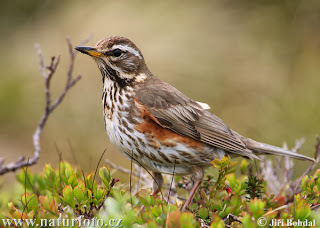 From the photo's there does seem to be a difference in the shades of brown on the back and wing of the bird, I'll have to keep an eye out from now on.

P.S. Trip to WWT Slimbridge a week on Wednesday. I'll try get some decent photo's and something to write up about!

Hello to anyone, who still follows this blog! I imagine there are very few of you as I've been without posting in nearly a year.

Unfortunatley university has meant my birding is now down to a minimum, as I've highlighted in previous posts, but I am now toying at the idea of doing a weekly post on monday nights about interesting things that have occured, maybe not in my first hand birding experience but in what I've been researching for projects/general interest.

So I'll treat this as a prelude and try and give a catch-up of whats being going on since Christmas last year. I have been bird ringing when I've been home and have managed to ring a brood of Raven chicks back near the beginning of the year. After the bad year for Barn Owls that has developed across much of the country I continued to help out in monitoring the state of affairs in Lincolnshire. The news is better here than it was in most of the country, though still bad in general (a brood of 7 was a highlight however, the later season proving more productive than early brooders).

During August I spent 3 weeks doing a research project in the Peruvian Amazon studying the effects of ecotourism on the Tambopata National Reserve. We set up remote camera traps and spent our time performing vegetation structure surveys alongside to make our results more viable. 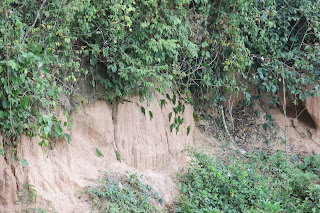 The 'Colpa' a parrot claylick, close-by to the ecolodge 'Explorers Inn' where we were based for the most part of our stay. 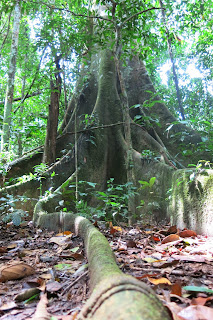 A very big tree! The roots don't extend far into the ground here as the soil layer isn't very thick. So instead the roots span out across the ground. Look incredible. 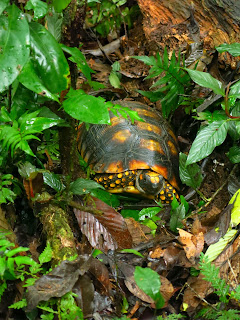 A Tortoise. I have no idea of the species, but he/she was pretty sweet. 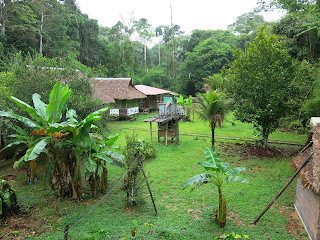 Control Point Malinowski. We met here with SERNAP who act as reserve security to hand over camera's by which the project could continue without our teams prescence. 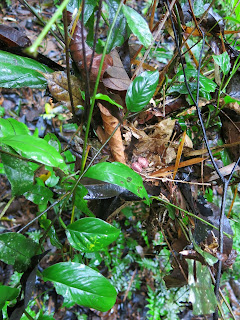 Something bird related! I have no idea of who was responsible for this nest (maybe someone out there does?) but there were Screaming Piha calling around us. Cool little nest.

Vermillion Flycatcher. Pretty bird that kept dropping down and picking invertebrates off of the surface of the rather swollen river. It rose dramatically after an amazing storm the night before. Didn't stop us dodging tree's on our journey upriver to Malinowski though. 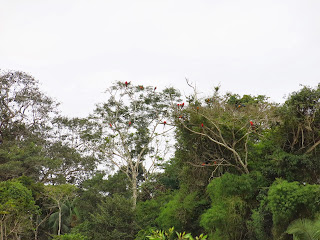 Another 'Colpa'. got the privaledge of watching Red and Green, Blue and Yellow and Scarlet Macaws all communing together to get the vital nutrients from the clay. 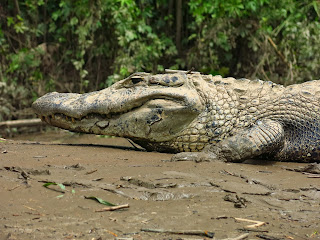 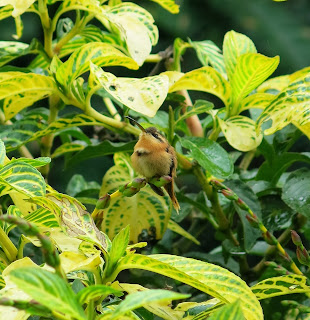 A little hummingbird that was present everyday on the bushes outside our lodgings. I think it's a Reddish Hermit but I'm not certain. 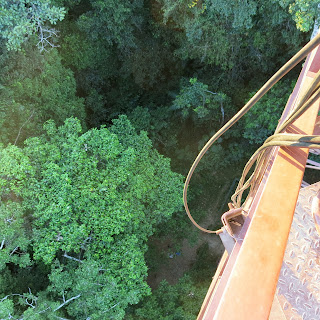 Proof that maybe I can get over my fear of heights...42 metres up the canopy tower. The canopy below and 2 specs of people below that. 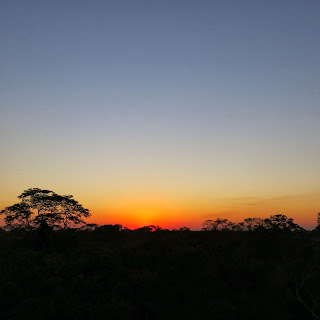 Why I decided climbing 42 metres was worth it. Simply stunning. 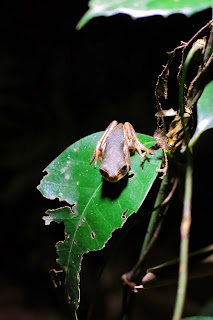 The walk back after sunset brings a new side to the rainforest. The nights were just a diverse as the days and the critters were mainly different. 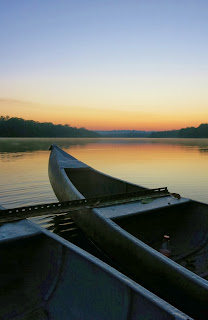 Lake Cococotcha. An amazing night. We stayed in a hide and watched out over the lake for sunset before undertaking a Caiman count. Was great fun. Then up at daw for sunrise and to watch Giant River Otters play. Didn't get close enough for photos of them but it was still something incredible to tick off the list of amazing things I've wanted to do for a long time. 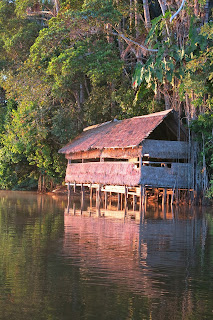 Where we set up the hammocks on the Cococotcha night. 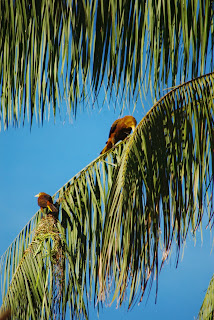 The resident Russet-Backed Orapendula's. Amazing bird call to wake up to every morning and a sound I miss waking up to.

Recently I've joined the facebook page Next Generation Birders. Really good to find some people of a younger generation sharing an interest in birds. Ringers, twitchers and general birders. All a good laugh and some interesting debates.

So last time I updated was apparently in June. I have been rather busy in the latter part of 2012. Unfortunatley it hasn't been entirely bird related but majority due to the joys of second year University work. (but being on an Ecology course I can't complain too much about that).

I will write up about my time at Spurn Bird Observatory however. I spent the best part of my August here this summer, and whilst not being there at the best time of year for migration I did get a lovely chunk of east coast migration during early Autumn migration.

I was around for the main movement of Willow Warblers through the area and also got some treats in the form of Pied Flycatchers and Redstarts being present throughout my stay. I also got some great and well need experience with seawatching, something I can't claim to have done much til that time. But doing tern counts every evening with the locals was one of my highlights, always willing to give a hand! 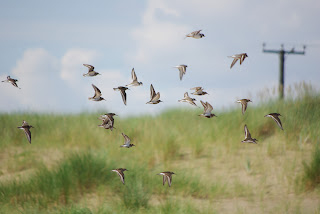 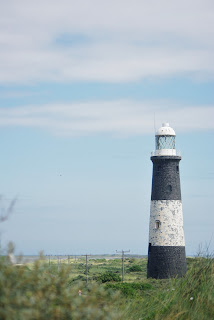 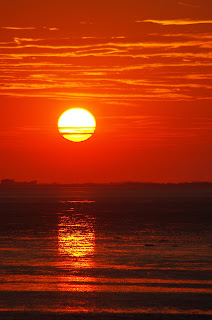 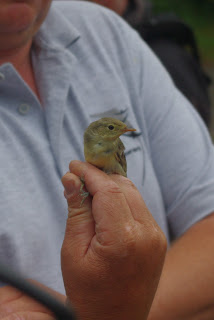 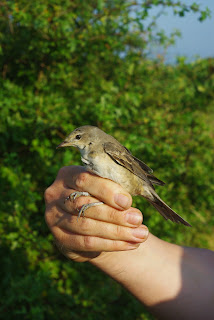 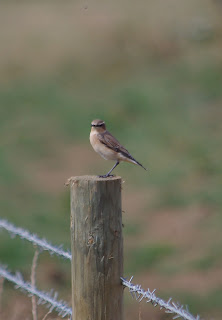 Being Spurn Bird Observatory, I managed to see a good bunch of species that I hadn't seen before (or ringed in some circumstances!) The first new species was on the first evening when I got a view of a Pomarine Skua at the seawatching hut. By the end of my stay I had also seen Long-tailed, Arctic and Great Skuas. White-rumped Sandpiper and American Golden Plover were species from over the Atlantic that also were around during my stay. I got my hands on one of the two Barred Warblers ringed during my stay, as well as an Icterine Warbler (my second in the UK, the first being at Icklesham last summer). I missed out on some of the later species that graced Spurn in later autumn (Red-brested Flycatcher, Yellow-browed Warbler etc) but you can't win them all!

I can't claim to have done much birding at Uni, but I have seen Stonechat and Dartford Warbler in the local Heathlands.

Right now I am having my last day in Bournemouth before christmas and tomorrow (technically today) I will be returning to Lincolnshire. With news of forgein ringed Lesser Redpolls and many a Brambling at the main winter sites I can imagine it will be a good christmas!
Posted by Daniel Wade at 00:44 1 comment:

And technology finally reboots itself!

I'm back! My laptop has now decided I can infact use blogger once again (why I wasnt allowed to is a mystery) My last day of freshers life is upon me and hence this summer can be turned around from alcohol fuelled partying (and hard work...) to birding. C-permit will get an outting finally, with a Kestrel nest box I know to have at least 3 chicks in down the road I hope to begin as I mean to continue.

Will once again be spending as much time as possible out with Owls and Raptors pullus, having already ringed Peregrine chicks earlier on last month, hopefully it won't be the only highlight. I will also be spending my August at Spurn Head Bird Observatory on the Yorkshire Coastline. Cannot wait!
Posted by Daniel Wade at 18:46 17 comments:

My laptop has decided that updating my blog is on the list of things I cannot do anymore (Its a long list, my laptop has had it). So I update from the university library.

So birding wise its been rather slow recently as all the deadlines crash in on me. Missing the majority of the winter ringing down the fen is a big shame but I did get a little done when I briefly returned in February. Also seeing 8 Cranes fly over my home town (A special thing for me as I have never seen any before!). Bar this I have also been on my first bird ringing excursion on the South Coast with a Siskin session with the Christchurch Harbour ringing group at Blashford Lakes. Yet to join them again but plan to in the not too distant future.

Now back to the joy of biology write-ups. Good ol' enzymes!
Posted by Daniel Wade at 18:11 2 comments:

Off raising money for charity for the weekend/ longer by blagging my way as far away from campus as possible. Who knows where I will end up and birds I will see. Very excited!
Posted by Daniel Wade at 07:41 No comments:

Birds I would like to catch up with this winter.
1) Whoopers and Bewicks at Welney would be loveeeely
2) A Wash wader spectacular something I still have never done but would love to.
3) Winter Finch ringing. Lets hope for another winter filled with Brambling and Redpoll!

They way things are going I won't be back home to go and do these things til middle of December so a little wait to come. Also need to get down to Portland Bill or Christchurch Harbour to explore the local avifauna soon.

Oh and not forgetting Waxwings. I would definitley like to see another few of them this winter.
Posted by Daniel Wade at 13:49 No comments: